Heather received her BSN from The University of Texas at Austin in 1996 after falling in love with the profession of Nursing. Shortly after graduation, she moved to El Paso, Texas and practiced nursing i 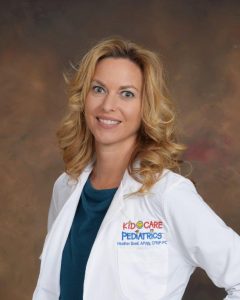 n the Neonatal ICU, Newborn Nursery, and General Pediatrics floors. She obtained her MSN/PNP from The University of Texas Medical Branch at Galveston in 2005. She practiced as a Certified Primary Care Pediatric Nurse Practitioner with the immigrant population along the Texas-Mexico border for 10 years. In 2006 she entered academia and taught undergraduate pediatric nursing and graduate nursing at The University of Texas at El Paso. In 2012 she became the director of the Pediatric Nurse Practitioner programs at UTEP and obtained her PhD from New Mexico State University. In 2015 she moved to the DFW Metroplex to be closer to family.  In 2016 she assumed the role as Director of the Pediatric Nurse Practitioner and Neonatal Nurse Practitioner programs at The University of Texas at Arlington. She has also worked part time in pediatric urgent care for the past few years. She joined Kid Care Pediatrics in 2016.  She speaks Spanish.
She has three busy children ages 14, 12, and 11, and is mama to a puppy named Charlie, a kitten named KitCat, and a horse named Scout.  Her children are actively involved in eventing, football, baseball, tennis, and theater. She loves running, baking, sunflowers, the Texas Longhorns, and Dallas Cowboys.