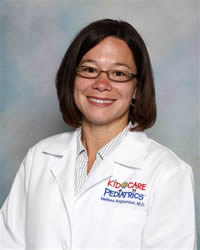 Dr. Melissa Asgaonkar was born and raised in the metro Detroit area. She completed her undergraduate studies at Wayne State University in Detroit, Michigan in 1996. She attended medical school at Wayne State University School of Medicine, where she also met her husband who is also a physician. After graduating from medical school in 2001, Dr. Asgaonkar completed a pediatric residency at the Cleveland Clinic Foundation in Cleveland, Ohio in 2004.

Following residency, Dr. Asgaonkar moved to Louisville, Kentucky where she practiced outpatient pediatrics in a private setting for the next three years while her husband completed further medical training. Once his training was complete, Dr. Asgaonkar and her husband decided to move to South Bend, Indiana to be closer to home. In South Bend, she worked as a pediatrics hospitalist for two plus years. During this time, she was Vice-Chief of the Department of Pediatrics and was very involved in medical resident education and training.

In 2010, Dr. Asgaonkar and her husband decided to relocate to the Fort Worth area. While working as a hospitalist was enjoyable, she missed the patient and family relationships that are developed in a outpatient pediatrics setting and decided to return to private practice. Dr. Asgaonkar joined Kid Care Pediatrics in April 2011.

Dr. Asgaonkar is married with two children. She loves being involved in her children’s school activities and enjoys sewing, reading, and watching football in her free time.